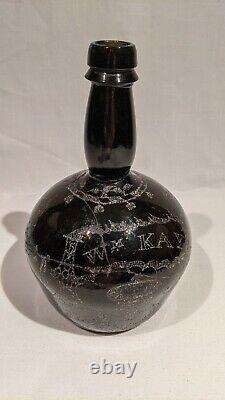 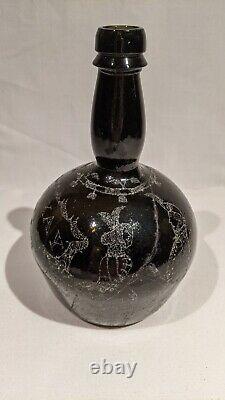 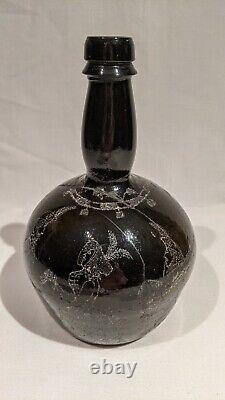 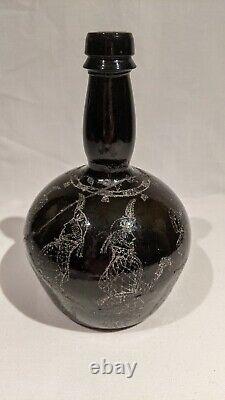 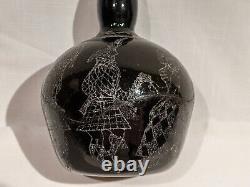 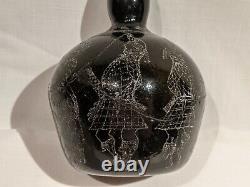 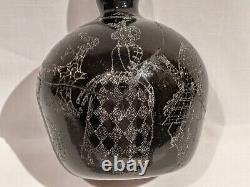 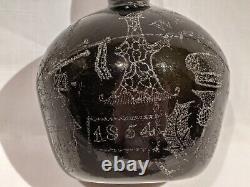 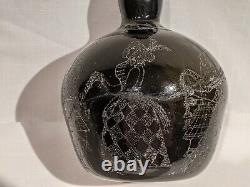 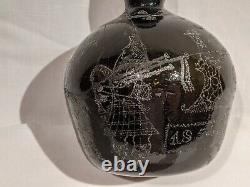 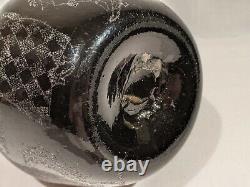 A wonderful Scottish stipple etched blown glass pontiled wine bottle dated 1854. This is a type of bottle commonly described as black glass. The glass appears as black until held in bright light & it appears as dark green.

This is a type of blown glass wine bottle which was made in Scotland. The following designs were etched on this bottle when it was made in 1854: a man with bagpipes, two large couples comprised of a man (with each of the men wearing a kilt) & a woman dancing, Wm. Kay 1854, thistle plant with two leaves & crown above. The bottle measures 8 7/8 inches tall by 5 1/2 inches across the widest point.

Along a couple of the cracks there are some tiny chips missing off of the glass. The glass has a lovely bright surface sheen.

There are no stains on the outside or on the inside of the bottle. This has obviously been an above ground bottle all of its life.

Stipple etched Scottish black glass wine bottles from this era, even with much more simplistic & smaller designs, are relatively hard to find. Most have a far lesser degree of etching than this example.

The bottle we are offering is one of the most elaborately decorated examples of the stipple etched variety which we have ever encountered in our 50+ years of being interested in early wine bottles. But, still a very advanced example of the form & a jewel for the advanced collector of this type of early wine bottle. This item is inventory #9156. Is an estimate and the actual cost may differ. The item "1854 SCOTTISH BLACK GLASS WINE BOTTLE, VERY ELABORATE STIPPLE ETCHED DESIGNS" is in sale since Tuesday, September 7, 2021.

This item is in the category "Collectibles\Bottles & Insulators\Bottles\Antique (Pre-1900)\Utility & Black Glass". The seller is "imajgin" and is located in Lampeter, Pennsylvania.

This item can be shipped worldwide.