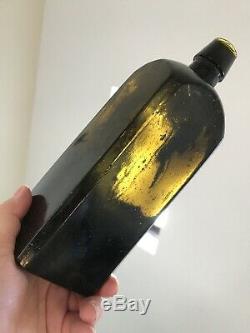 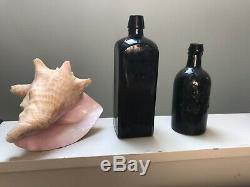 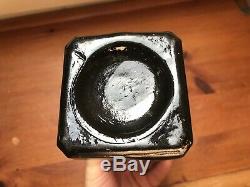 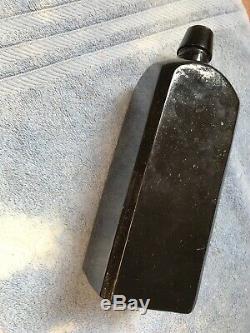 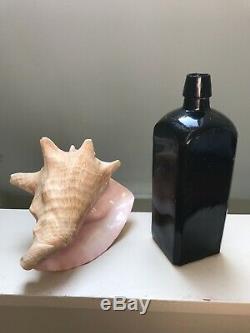 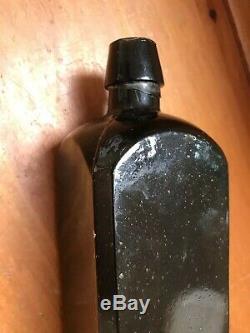 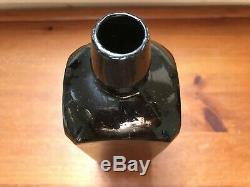 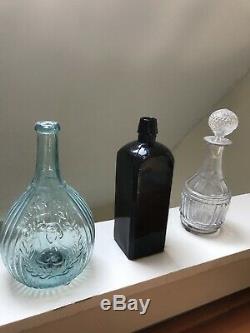 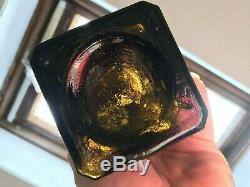 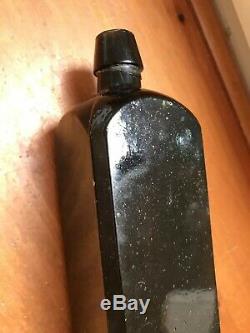 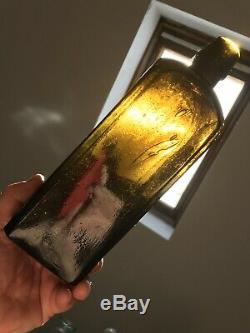 Offered, here, is an Extremely Rare, Original, Antique, 1860's-Era, Mold-Blown, American Bitters Bottle that is Similar to the Dr. Hostettor's Stomach Bitters Bottle. Measuring about 9 1/2" High, The Bottle is Square, in Shape + Features, a Very, Crudely "Applied" Single, Sloping-Collar Top / "Lip-Finish, which has a Good Bit of Excess Glass, that has Dripped + actually has Formed a Second Ledge on the Bottom Part of the Lip. There is a Nice Crudeness to the Sides of the Bottle, as is actually, seen on the Embossed, Dr. I have never, seen, another "Un Embossed" Dr.

CONDITION: The Bottle is inGreat, "Minty", Original, Antique Estate-Found, Bottle w/ NO FORMS OF "DAMAGE", NO CHIPS, NO CRACKS, NO POT-STONE RADIATIONS, NO OPEN-BUBBLES, NO VISIBLE STAINING. There is a Spot of Edge-Roughness or Case-Wear, but No Issues.

There is some Dirt, Still Lodged, with in the Bottle, that may Clean-Out, with Good Washing. Very Clean + Very Nicely DisplayingThe "Last Image", in the Photo-Gallery, of this Listing, is a Picture, of the Original "Embossed", Earliest "Black-Glass" Dr. Hostettor's Stomach Bitters Bottle, but It is NOT UP FOR SALE / OR INCLUDED, IN THIS LISTING, which is Solely, for the Sale of the Unembossed Black-Glass Bitters BottleThanks. Dyspepsia's pangs, that rack and grind The body, and depress the mind; Slow constitutional decay, That brings death nearer, day by day; Nervous prostration, mental gloom, Ague.

S, that, as they go and come. Make life a constant martyrdom. Neath which the strong man's vigor wanes.

Bilious complaints, -- those tedious ills. Ne'er conquered yet by drastic pills. Dread Diarrhea, that cannot be. Heralds of madness or the tomb.

For these, though Mineral nostrums fail. Means of relief at last we hail. HOSTETTER'S BITTERS medicine sure. Hostetter's "Celebrated" Bitters was a nostrum developed by Dr. Jacob Hostetter of Lancaster, Pennsylvania. During the Civil War, Dr.

The original formula was about 47% alcohol -- 94 Proof! The amount of alcohol was so high that it was served in Alaskan saloons by the glass. Hostetter sweetened the alcohol with sugar to which he added a few aromatic oils anise, coriander, etc. And vegetable bitters cinchona, gentian, etc.

To give it a medicinal flavor. From 1954 to 1958, when it was no longer marketed, the product was known as Hostetter Tonic. The Hostetter's Bitters bottle illustrated with the Medicine Bottle Index was recovered in 1987 by a Midwest Archeological Center team from a privy pit at Fort Union Trading Stie. Fort Union was an American Fur Co. The small, plank-lined privy pit was located in the fenced yard behind the Bourgeois (fort manager) House.

Other notable artifacts recovered from the feature include a second bitters bottle, a pair of men's boots, a pair of children's shoes soles, and an undecorated plate base marked G. At 95 cm (3 ft 2 in) below the top of the privy, a complicated series of leather and bead layers were discovered in the north and east portions of the pit. Four distinct bead patterns were identified including chevrons, tulips, rosettes, and linear designs. Linear bead bands and rosettes were associated with desiccated remains of moccasins.

Although attempts were made to recover the beaded patterns intact, these efforts were largely unsuccessful. Nevertheless, photographs of the beads in situ may allow for the ethnic affiliation of the maker to be determined at some point in the future.

Together, the artifacts suggest the privy was probably in use after 1860 during the last years of Fort Union's existence. The item "Bitters Bottle Dr Hostettor's Unembossed Civil War Black Glass Unembossed 1860s" is in sale since Sunday, March 3, 2019. This item is in the category "Collectibles\Bottles & Insulators\Bottles\Antique (Pre-1900)\Bitters".