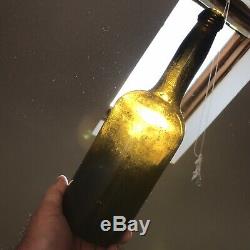 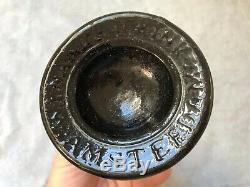 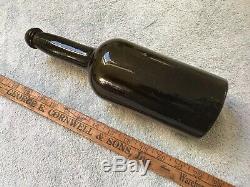 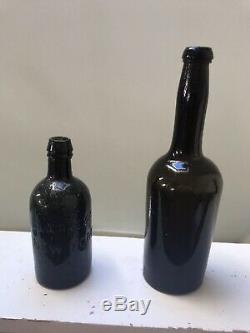 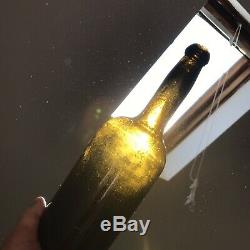 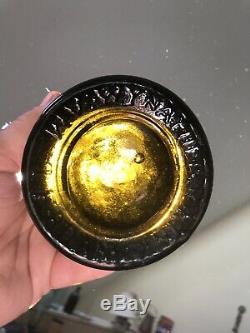 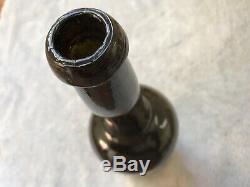 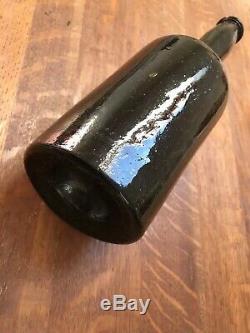 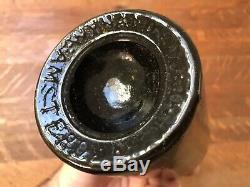 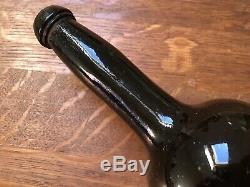 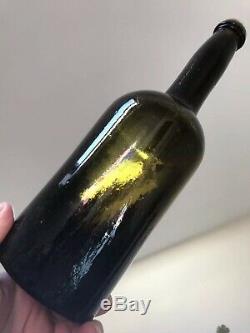 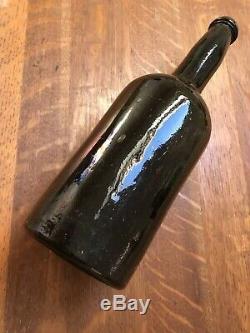 This is a Super Rare, Early, Continental, Mold-Blown, Black-Glass Whiskey / Spirits Bottle. It is Made with a Hand-Formed Lady's-Leg Style Neck + Crudely Applied "Sloping Double-Collar Top / Lip-Finish". The Base is Embossed, Circularly, w/ "WYNAND FOCKINK / AMSTERDAM".

The Base appears to be without a "Pontil-Scar" but is Very Close and It Probably Dates to about 1860-70. I have been avidly Collecting Early Bottles from this Era for Over Forty Years, and Have Never Encountered This Particular Base-Embossed Black-Glass Bottle, So I know it is Very Rare, + has Not appeared at any of the East Coast United States Bottle Shows that I have attended Over the Many Years. CONDITION: The Bottle is in Excellent, Original, Condition w/ NO FORMS OF "STRUCTURAL DAMAGE", NO CHIPS, NO CRACKS, NO OPEN-BUBBLES, NO "POT-STONE RADIATIONS", NO FLEA-BITES, NO DISTRACTING STAINING, NO ABRASIONS, NO BRUISES, NO SCUFFS, NO DINGS. There is a little Light "Dullness" in Places but Pretty Clean Over-All + Strong Embossing Nice.

In the 17th century, when the VOC ships brought herbs, spices and sugar to Amsterdam, distillers started distilling liqueurs on a large scale. The reason that the Amsterdam liqueur industry was becoming so important was that the city had become very prosperous and that liqueur, contrary to beer and genever, was an expensive drink which only the rich could afford to drink on a regular basis. When in 1724 Wynand Fockink acquired the distillery and the bar in the Pijlsteeg dating back to 1679, Amsterdam was still a rich and prosperous city with a thriving liqueur industry. In 1778 Wynand Fockink died and left the company to his single surviving heir, his daughter Maria. After her fathers death Maria continued the distillery together with distiller Dentzel.

Business was flourishing and through Marias granddaughters it came in the hands of the Schmitz family. Until the takeover by Lucas Bols in 1954, the company was managed by descendants of Wynand Fockink. Under Wynand Fockink and his descendants, the liqueur distillery became one of the largest Dutch distilleries. By the end of the 18th century the company owned six large premises on the Oudezijds Voorburgwal and another six in the Pijlsteeg.

In the first decade of the 19th century the company expanded through export as well. By that time, Wynand Fockink owned trading houses in Berlin, Vienna, Brussels and Paris. Between 1815 and 1860, France was one of the largest liqueur customers. In those days a passage was constructed between the Damstraat and the Pijlsteeg in order to increase the visibility of the current Wynand Fockink proeflokaal. Around 1870 Wynand Fockink had 80 employees, operated five stills and used a steam engine of 30 horsepower.

In the same era export to the USA started to grow and in 1920 Wynand Fockink turned into a publicly owned company, until that year it had always been a family owned company. The item "Black Glass Bottle RARE Base Embossed Ladys Leg Whiskey Wynand Fockink 1860s" is in sale since Monday, January 13, 2020. This item is in the category "Collectibles\Bottles & Insulators\Bottles\Antique (Pre-1900)\Liquor".